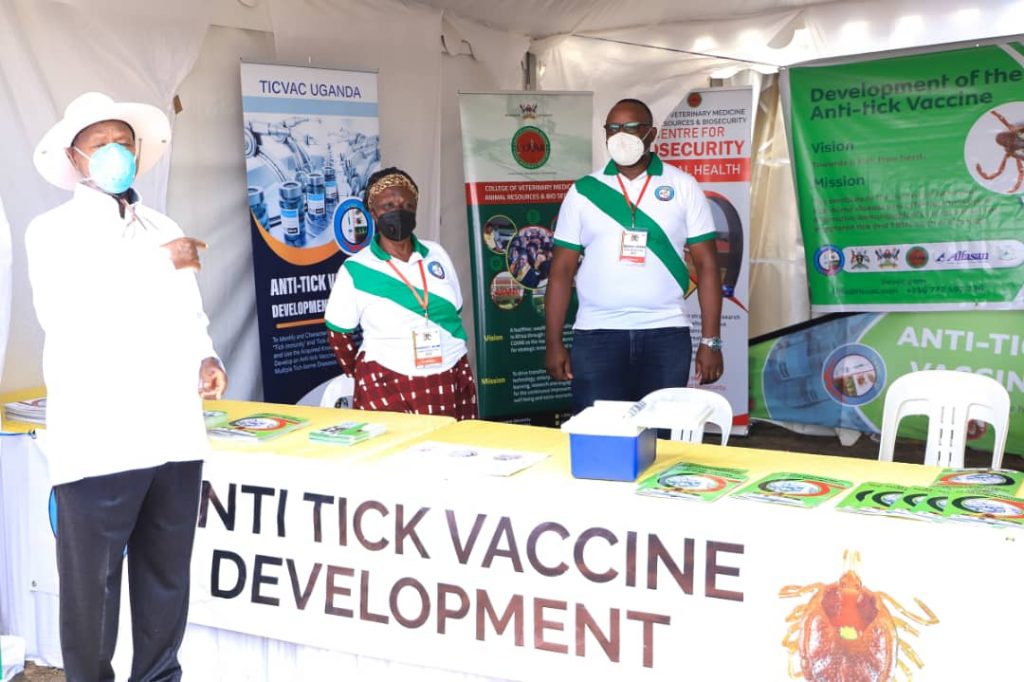 The President of the Republic of Uganda, His Excellency. Gen. Yoweri Kaguta Museveni poses for a photo with the Principal Investigator, Anti-Tick Vaccine Project, Prof. Margaret Saimo Kahwa (middle) during the World Science Day Celebrations at Kololo Independence Grounds on 10th November 2021.

From 8th to 10th November, 2021, the Anti- Tick Vaccine Project joined the rest of the world to commemorate the World Science Day for Peace and Development under the national theme; “Breaking the Silos and Leveraging Synergies for a sustainable workforce,” held at Kololo Independence Grounds.

The celebrations, organized by the Ministry of Science, Technology and Innovation, under the leadership of Hon. Dr. Monica Musenero Masanza, were officiated by the President of the Republic of Uganda, His Excellency. Gen. Yoweri Kaguta Museveni on 10th November, 2021.

A 3 days’ exhibition at Kololo Independence Grounds, which brought together innovators from various economies and industrial value chains was one of the activities that marked the celebrations.

Exhibitors/innovators were classified into 6 economies built around the Industrial Value Chains, which represented the technological developments so far made and envisioning where they are heading. These economies included; the engineering economy, mobility, beauty and apparel, the digital economy, agro security and the pathogenic economy. 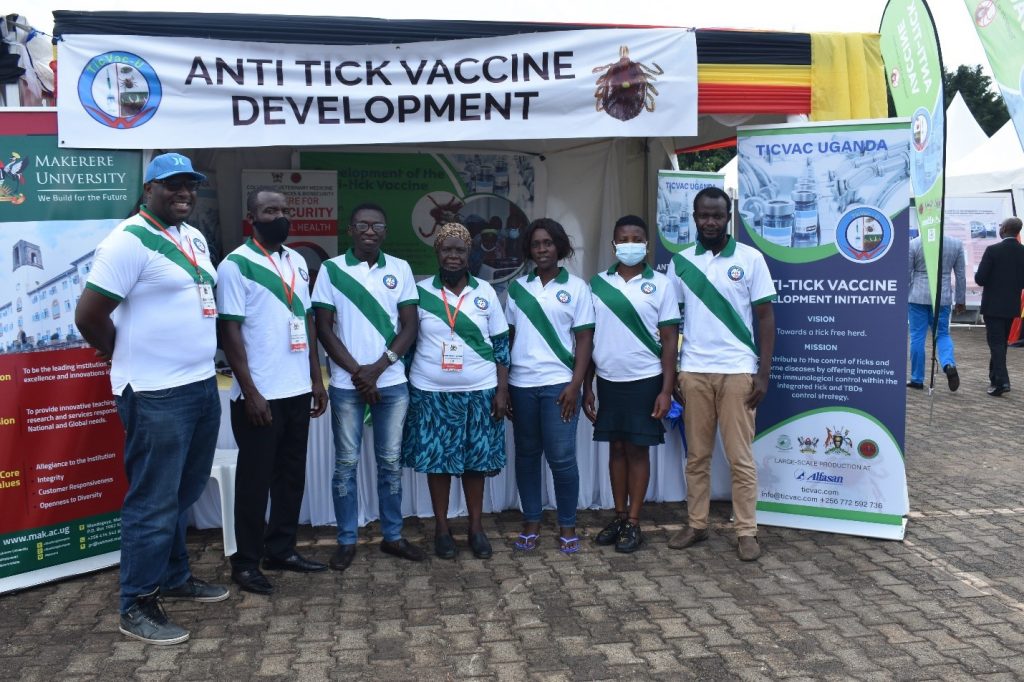 Some of the Anti-Tick Vaccine Project Team of exhibitors pose for a group photo with the Principal Investigator during the World Science Day for Peace and Development Exhibition at Kololo Independence Grounds on 9th November 2021.

In particular, pathogen economy is built on innovations targeting disease control and management, involving the making of vaccines, pharmaceuticals, diagnostics and biological equipment/material related to management and control of diseases.

Makerere University College of Veterinary Medicine, Animal Resources and Biosecurity’s Anti- Tick Vaccine Project, which falls under the pathogen economy was an active participant in the commemorations. The project exhibited a trial vaccine against ticks in cattle, which was appreciated by her stakeholders and most especially the President. The Project is currently undertaking the second phase of clinical trials of the Anti-tick vaccine. During the final national celebrations held on 10th November 2021, the President challenged Ugandans to be involved in industrial value chain. He noted that scientists must support import substitution, export promotion including adding value to products that the country already has on market and exported.

President Gen. Museveni affirmed that the Pathogen economy is a vital source of money despite being a challenging field involving diseases. “People are earning money from diseases through making of vaccines, medicine, and yes, people are sick, but the economy is making money out of this problem,” said the President.

He further added, “Africa has been losing money on account of diseases, we have drugs all imported, which leaves the country behind of development.”

The President further highlighted on the expenditure in the various economies to the global development. He highlighted that pathogen economy consumes 1.7 trillion Dollars in the whole world spent on vaccines and drugs, engineering products consume 1.1 trillion dollars, mobility economy which will be consuming 9 trillion Dollars by 2030, and Agro-security 13. 3 trillion Dollars, in which Africa doesn’t part.

At this point, President Museveni congratulated scientists for being aggressive in contributing to the country’s economy. He affirmed to country men and women about his determination to financially support all scientists working for the Government of Uganda.

He promised Scientists that their efforts will be supported by the government to reduce on dependency on foreign power.

As he concluded his remarks, His Excellency appreciatively highlighted that many of the exhibited efforts were supported domestically without foreign power involvement.

Hon. Dr. Monica Musenero informed the President, Country men and women that the international theme of the 2021 World Science Day for Peace and Development Commemoration was domesticated to, Breaking the Silos and Leveraging Synergies for a sustainable workforce,  which aligns  with the ongoing efforts to address the issues of fragmentation through the years of capacity building in the country.

She highlighted that the exhibition brought together Value Chains which drives social capital and hence industrialization.

The Minister further petitioned the President to foresight the issue of financing the efforts of developing a well-structured business development system, and to as well support the idea of introducing incubation and technology packaging, which she considered as a big limitation for productivity especially in the Agro-security sector.

Speaking on behalf of the Consortium of Scientists and Innovators, Prof. John David Kabasa, who is also the Principal of Makerere University College of Veterinary Medicine, Animal Resources and Biosecurity (CoVAB) appreciated the support and visionary leadership of the President Gen. Museveni in building a robust, competitive sustainable Science Technology and Innovation System in Uganda.

He affirmed that the President’s support is evidenced in numerous initiatives across the country; Universities, research institutes, programmes and grants that have been given to many universities including Makerere University.

Prof. Kabasa appealed to the President that the knowledge value chain has to be concluded, given the existing capacity among the scientists to work with innovators to create knowledge and accelerate industrial development.

He also highlighted on the need to build community capacity to accelerate the operation of value chains.

Prof. Kabasa further informed the President about the innovators’ and scientists’ prayer that; “here we are, send us.”

Some of the nominated best innovators from the different economies were awarded plaques by the President.

It should be noted that the World Science Day for Peace and Development Celebrations brought together Heads of Diplomatic Missions, Heads of Institutions, Scientists/innovators/researchers, students and the general public. 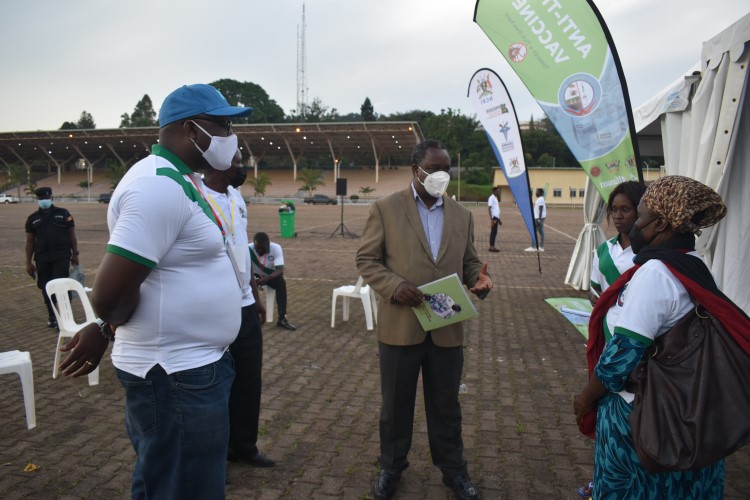 Former Minister for Science, Technology and Innovation, Hon. Dr. Elioda Tumwesigye meets with the Anti-Tick Vaccine Project team, congratulates them upon the development of a vaccine which will save the country’s economy by fighting ticks and tick borne diseases in cattle. (Photo taken on 9th November 2021) 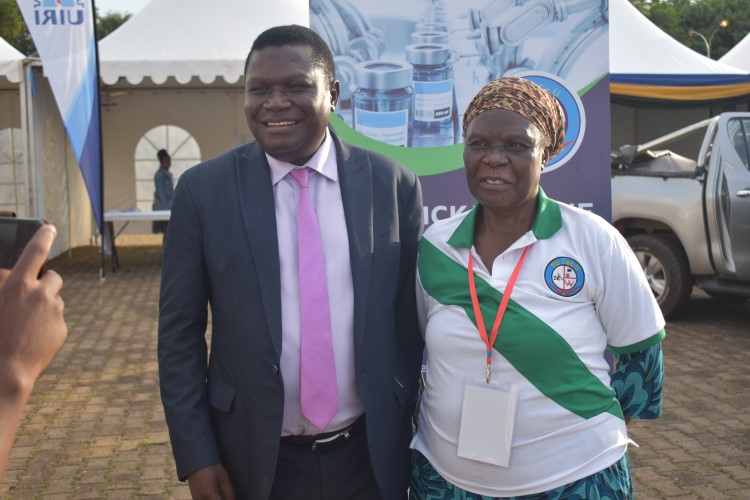